The above quote couldn’t be more spot on with what I have recently learned, even if I said it myself (thank you D’Onofrio – You said it, but I was thinking it #moviequote) 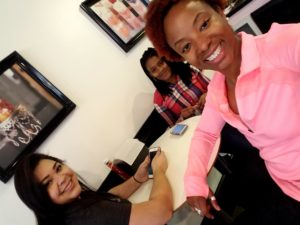 I was blessed with a spontaneous trip, with some dear friends of mine, to Atlanta, GA for a night.  We went into this trip with no legitimate plans except for the place we were going to sleep, and getting some ink together.  Everything else, we agreed that we would let Daddy God decide the rest.  During this trip, we met Ashton, Tracy, and Tristin, and I was introduced to the lack of importance of first impressions.  Let me first introduce you to Ashton.

We met Ashton at Memorial Tattoo.  When he walked in, I remember thinking, “he doesn’t look like he’s in a good mood – I hope he’s not my artist”.  My first interaction with him was when he came over to chat with my friend, Rebeca, about her tattoo design.  Ashton, to me, seemed very terse as he talked with Becs about her design – I was NOT a fan.  I remember making some comments about him, in Spanish, to Becs about how he seemed to be in a bad mood, all the while I continued to think, “I hope he’s not my artist”.  My next interaction with him, was when he called me back to his “space” – yes, HE was to be MY artist.  You know, Daddy God has such a sense of humor, doesn’t He? I’m glad He does, because this allowed me to get to know Ashton.

As soon I got to Ashton’s space, I immediately asked him his name.  I figured that maybe I should stop looking at him as a cranky artist, but as a person with a name.  As soon as I learned his name, I could feel the tension loosen, so I continue to chat with him.  We joked around a bit, and I even managed to get him to smile and to laugh.

Ashton was pretty awesome, and his lines were nice!  His tattoo ideas for Becs were spot on, and he REALLY loved my idea for my tattoo and the location of it.  I began to see Ashton in a different light, and I was no longer thinking, “I hope he’s not my artist” but I was rather glad that he was mine. 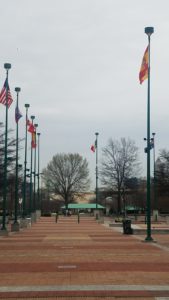 We met Tracy at Waffle House.  Friends, I don’t care where I am, Waffle House is always satisfying to my stomach, however Tracy was not very satisfying to my spirit – at first.  When the girls and I walked into Waffle House and seated ourselves, a trainee came over to us and began take our order.  It was very obvious that “the head lady in charge” did not like how the trainee was taking our order, because she was VERY vocal about it.  The way that she interacted with the trainee made all of us a bit uncomfortable – we all felt bad for her.

Nonetheless, once we placed our order, we continued to just be us.  We chatted, joked around, laughed, and just had a great time.  It was our smiles and laughter that brought “the head lady in charge” back over to us, with a smile on her face that WAS NOT there earlier.  She mentioned how happy she was to see our smiles and laughter because she had been dealing with some “not so friendly” customers all morning, and that we were the first ones to come in to Waffle House in such a great mood.  It was our joy that helped to bring her joy.  We all smiled back at her and told her that we were so happy to help make her day better.  It was also at this time that I took a peak at her name tag, Tracy.

She was no longer just “the lady in charge” who did not like how the trainee was taking our order, who made us uncomfortable, but she was now Tracy, who was having a rough morning, but needed a reason to smile.  As soon as that veil was removed, we were able to see Tracy’s smile – she was beautiful.

We met Tristin at Starbucks.  I am such a coffee girl, but I typically like to find a cute little coffee shop to go to, because I like how “homey” it feels and just how unique coffee shops are.  However, where we were, Starbucks just so happened to be at almost EVERY corner (reminded me of San Francisco), and there were two locations in walking distance from where we were, so Starbucks it was.

I walked in not really knowing exactly what I wanted, I just knew that I wanted some coffee.  “Blonde” was posted everywhere, so naturally it caught my eye.  Becs and I didn’t exactly know what this was all about, so we asked the barista, and he explained to us that it was some kind of espresso – STRONG espresso.  Becs and I were all about that,  Kina chose to pass on coffee.

Becs and I had to run to the bathroom, so after placing our order, we went to find the bathroom and asked Kina to listen out for our drinks.  When we returned, Kina was nicely protecting our drinks :). 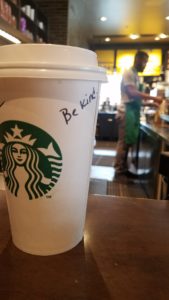 Becs and I chose to sit at the counter to ask the barista for some ideas on what to do for the day, before we headed back home to (NC that is).  He mentioned the zoo, and we joked around about how we didn’t want to send Kina back home. We thought it was funny, but Mr. Barista said that we needed to stop “bullying” Kina, and offered her a drink, on him.  After she finally said yes, he made her a white chocolate mocha, but it was HIS white chocolate mocha (I have since, gotten me one of his white chocolate mochas – YUMMY!!) 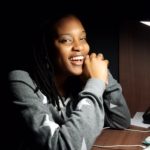 Kina joined us at the counter and we all began to converse with the barista, it was then that we found out his name.  When Tristin gave Kina her mocha, he wrote “be kind” on the cup – how fitting for our trip of #meetnostrangers.  We found out that he is a PHENOMENAL writer, and we all told him that he needs to start a podcast.  Tristin has such an “easy to listen to” voice, and he has such a message that the world needs to hear.

One thing he talked about that really opened our eyes was how, “we spend so much time living in someone’s else’s moment, looking at their posts, when that moment has already past, and that person may not have even truly lived the moment themselves.”  We live in such a world where people would rather live someone else 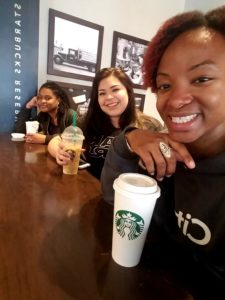 ‘s life, instead of living their own.  There is so much to be said about his words – take some time to think what that might mean for you. 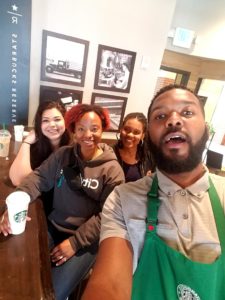 You know, watching Tristin in his job, gave us all SOO much life.  You could see that he TRULY enjoyed what he did, even though this job is not his ultimate dream.  We watched him as every customer came in, he greeted each one genuinely, and made sure each one enjoyed their “cup of joe”.  Tristin was VERY aware of every single person, and still managed to keep us entertained in conversation.  There was so much joy in Tristin, that we couldn’t help but smile.  We sat at the counter for at least an hour and a half.  He taught us to have joy in EVERYTHING you do.

God gave me the task to go “meet no strangers” August of 2017.  With every “stranger” came a sense of joy that was inexplicable.  There is something about being able to hear/see someone else’s story come to life.  This trip really gave Kina and Rebeca a chance to experience the meaning of “meet no strangers” for themselves.  Seeing it come to life in their eyes brought me so much joy as well.

As you go throughout your days, I challenge you to go meet no strangers yourself.  Tell your own story.  Tell someone else’s story.  Experience the joy that comes with meeting no strangers.

Lessons I learned: Everyone has a story to tell, even if they don’t verbally tell you.  The question is, are you willing to hear their story before you disregard them because of a first impression?  Dr. Stephen Covey says to “Seek first to understand, then to be understood”. I think he has a point here. #habit5

My encouragement to you:  Don’t be afraid to stay pass the first impression.  Good things come to those who wait.